The Council today confirmed the following amendment I proposed to the Draft Development Plan:

“At locations where higher density development is being provided, encourage the development of car-free neighbourhoods, where non-motorised transport is allowed and motorised vehicles have access only for deliveries but must park outside the neighbourhood, creating a much better quality public realm with green infrastructure, public health, economic and community benefits.”

It reflects successful experience  in neighbourhoods such as Vauban in Germany and entire suburban towns like Houten in the Netherlands, as well of course in old cities around the world.

As recognised in the National Cycle Policy Framework (NCPF), a lot of the cycle infrastructure provided in recent years has been poorly designed.

Following on from this and the wider commitment in the NCPF to audit existing roads, I proposed the following amendment to the Development Plan.

“Review existing cycle infrastructure which was not designed in line with the Principles of Sustainable Safety in a manner consistent with the National Cycle Manual and the Design Manual for Urban Roads and Streets and undertake appropriate remedial works.”

Following public display, this amendment was confirmed by a margin of 1 vote today.

Following public display, the Council has voted, (by a margin of 1 vote!) to confirm the inclusion of the following in the Development Plan:

“Ensure that as soon as possible, but by the end of the lifetime of the Development Plan, the environment in the immediate vicinity of schools is a safe and attractive low speed (30km/h) environment, and drop-off by car within a given distance restricted.”

The text is copied from the National Cycle Policy Framework; it is something which should be happening at all schools nationwide by 2020.

Last month’s County Development Plan meetings discussed a wide range of issues. I’m posting some reports in particular on the motions I submitted. I also supported important motions by my Green colleague Roderic O’Gorman and a range of Councillors from all parties.

The largest batch of motions were those on cycling so I’ll address those first.

One of the results of the public display of the draft plan was the receipt of a range of submissions criticising the inadequacy of the policies contained in the draft as regards cycling.These came from a range of parties, including the National Transport Authority which suggested that the policies in relation to cycling in the plan could be strengthened.

In response to these submissions, I submitted a range of proposed amendments, many of which were directly extracted from the National Cycle Policy Framework (NCPF), particularly the policies and actions identified in the Framework for implementation by local authorities.

In advising the Councillors on the motions submitted, the Council management first claimed that many of the motions submitted were invalid as they didn’t relate to submissions received. This label was applied to 15 of the 21 amendments which I proposed based on the NCPF. When I pointed out their origin this claim did not resurface.

When it came to the discussions, the first two cycling related motions were

It was a bit of a surprise that, unfortunately, the Planning Department opposed both of these. The majority of Councillors supported my motion to mark the GDA routes on the maps despite the official advice against it.

However they also opposed my proposal that safe walking and cycling routes would be provided to new schools  as part of the school development process and a slim majority of Councillors voted it down. The media, starting with the cycling journalism website Irishcycle.com, naturally took an interest in this and reported it the following week: Irishcycle.com, TheJournal.ie, DublinLive.ie.

At the following meeting, the officials continued to oppose the cycling motions and a number of other important motions were defeated including a proposal to implement HGV management strategies in urban areas, a proposal to carry out remedial measures to existing cyclist unfriendly urban roads and a proposal to provide safe cycling and walking routes to existing schools during the lifetime of the plan including an audit of all schools. These motions were all based on the National Cycle Policy Framework adopted in 2009, but despite that the officials convinced a majority of Councillors to vote them down.

At a subsequent meeting, the media attention to the vote against safe routes to schools started to have an impact and my motions to provide cycle routes from Holywell, Portmarnock and Balgriffin to Kinsealy to serve the proposed new secondary school there and the existing primary schools were all successful. So overall, a mixture of good and bad news. 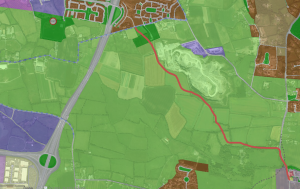 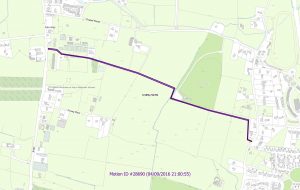 The amendments to the Draft Plan are on public display until 2nd December. At this stage they are only proposed amendments; they could be overturned following the consultation. So if you agree with any of the amendments, make sure to make a submission!

I’m still following up on the National Cycle Policy Framework (NCPF) issue. The media reports on the motion for safe routes to schools which was defeated, led to me learning from a member of the public of the existence of Planning Circular_pssp_8_2010_on NCPF_and_development_plans. This circular requires the Council to make the Development Plan consistent with the NCPF.

All of the cycling related motions had already been dealt with when I received the Circular but I immediately drew the attention of the next Council meeting dealing with the Development Plan to the obligations placed on the Council by the Circular. The Council officials were unwilling to recognise that the Circular had any significance to the process or to revisit the issues.

I have written to the Minister for Housing and Planning in relation to this.

My response to the draft Fingal Development Plan and the Strategic Environmental Assessment (SEA) for the Plan is here.

The main issues in my consultation response were sustainable development, climate change adaptation and mitigation, transport, car-oriented development, cycling, road proposals, aviation, building energy use, and renewable energy. A recurrent theme under many of these headings was the lack of actual assessment in the SEA report.

As Councillors, we will receive a report on all consultations responses in July and based on that feedback can submit amendments to the plan in August for meetings in September. I would welcome any feedback on the issues in my submission or on or any other aspect of the Development Plan.