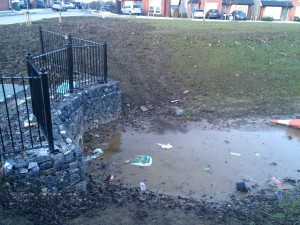 The new development Coill Dubh (opposite Malahide Community School) is supposed to have a sustainable urban drainage system in order to prevent runoff from the development causing flooding in the area. The drawings are shown in the planning file (F12A/0242) which was granted by An Bord Pleanála (overruling their inspector who recommended refusal on pedestrian safety grounds.)

It seems that what has been built is in breach of the drawings. Additionally, the landscaping and drainage was required by condition to be finished before the houses were occupied and that certainly isn’t the case.

Below are relevant extracts from the planning application and the conditions imposed by An Bord Pleanála, followed by photographs of what the ‘open space looks like at the moment. 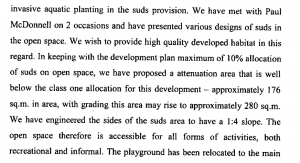 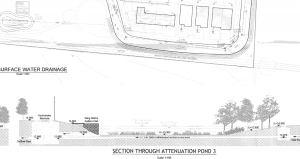 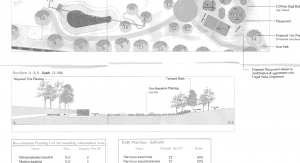 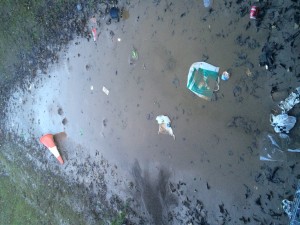 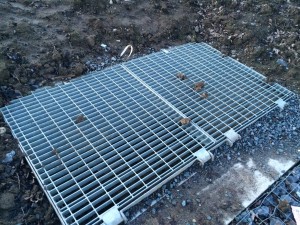 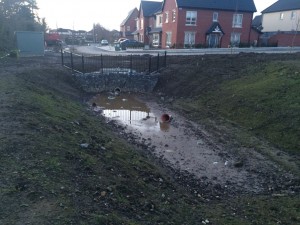 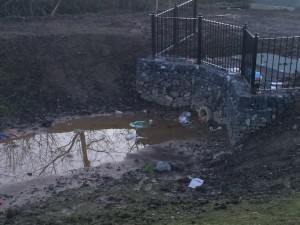 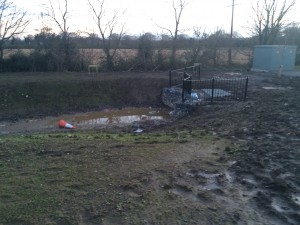 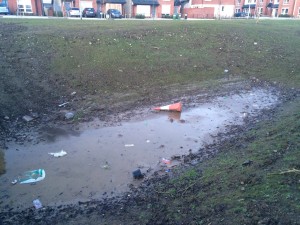 What has been built is spectacularly different to the original drawings. It is public health and safety hazard and it is a disgrace that it has been put in the middle of a public open space. The Council’s Planning Department must address this immediately.

We had an extensive discussion during the meetings on the draft Development Plan on the new Apartment Standards which have been centrally dictated by Environment Minister Alan Kelly.

The key advice from officials was that whatever Councillors thought of the standards, we were legally obliged to implement them in the plan. (See webcast at at 1h30 to 2h09 and 2h21 to 2h30).

However, there may be a problem with the legal status of those Standards. I have sent the following note to Fingal’s Chief Executive and as a result, the Council is getting legal advice:

My attention has been drawn to a legal question over the Apartments Standards issued by the Minister for the Environment in December and whether they are covered by the amendment to s.28 of the Planning and Development Act. There is a risk that our discussions last month may have been based on an incorrect understanding of the legislation.

“1.10 These guidelines have been issued by the Minister for the Environment, Community and Local Government under Section 28 of the Planning and Development Act 2000 (as amended). Planning authorities and An Bord Pleanála, are required to have regard to the guidelines and to apply any specific planning policy requirements of the guidelines, in carrying out their functions.”

​(They then go on to identify various policies as “specific planning policy requirements”​.)

The Planning and Development Amendment Act 2015 which amended s.28 (to oblige planning authorities to apply “specific planning policy requirements”​) was enacted on 29th December​ 2015​. So the requirements referred to in 1.10 of the guidelines didn’t have the legal significance they claimed​ at the time when they were adopted​.​

​This raises a series of legal questions, including: Must the guidelines be interpreted under the law as it was at the time when they were published? Alternatively, can the law as it is now be correctly used to retrospectively interpret and ​indeed ​make intelligible the guidelines, despite the fact that when they were enacted they actually didn’t mean what they claimed to mea​n? Given that legislation generally cannot be retrospective, is it possible for it to have retrospective effect in this manner? The answer to these questions may raise constitutional​ separation of powers issues​, such as whether the executive​ can​ validly presume what the legislature will do​.

​Obviously this is a matter of some complexity and I think it is essential that legal advice be sought. This has an uncontestable bearing on the validity of the Development Plan process as I know a number of my colleagues voted for amendments to bring the Draft Plan into line with the guidelines specifically due to the advice that we as a Council are legally required to implement the guidelines and not on the substance of the issue covered in the text being amended.

Fingal County Council’s draft County Development Plan 2017-2023 is on display for public consultation from today until 4.30pm on 29th April.  The draft Plan is online and available in all Fingal libraries. There will also be public meetings as part of the consultation process.

There are a number of aspects of the plan which need to be changed to bring it more into line with a transition to a sustainable low-carbon climate resilient Fingal. I will be working to make these changes.

The next stage of the plan will be to consider the response to the public consultation at a series of meetings in the Autumn.