Tetrarch is the property investment company which bought Howth Castle, Deer Park Hotel and the golf courses and woodlands.

Its submission to a process of Variation of the County Development Plan, seeking rezoning is here. It was rejected by Council planners and Executive (see page 61 of Chief Executive’s Report on the Variation) and by Councillors who approved the variation with no change to zoning in Howth at our June meeting.

Tetrarch has produced a ‘Masterplan’ for their lands which has generated a lot of concern locally: Part 1, Part 2, Part 3.

Further details are now available on the pedestrianisation of New Street. This measure is in line with the overall approach which I and my Green colleagues on Fingal County Council have been urging and which enjoys wide support from other parties also.

END_OF_DOCUMENT_TOKEN_TO_BE_REPLACED

The Operations Dept of the Council is continuing to work on the reallocation of road space and other measures to facilitate safe walking and cycling. We had an online meeting of the Area Cttee. last week and following input from constituents, I presented this list of options which is being considered. I would be grateful for any further feedback or suggestions.

The meeting received this update on the previous list of actions.

The other reports received by the meeting are also interesting – Covid 19 response and 2020 programme of works.

An Bord Pleanála approved the application for a Greenway link across Broadmeadow Estuary on 19th May. The Greenway will be a wonderful public amenity walking and cycling route. It will also change local geography fundamentally, connecting Malahide and Donabate by bicycle faster and easier than any other mode.

END_OF_DOCUMENT_TOKEN_TO_BE_REPLACED

Following on from the legal advice that there is an obligation to meet in person, the Green group on Fingal County Council has drawn up a proposal for online meetings which would see physical meetings taking place to confirm decisions taken at online meetings. We believe we must ensure the full operation of democratic local government in circumstances where physical distancing is a major challenge and a number of councillors are cocooning or self-isolating in line with advice for the protection of their own health or that of members of their households. The Corporate Policy Group today agreed to get legal advice on our proposal.

On foot of a proposal from the Green councillors, Fingal County Council is to reallocate road space in areas around the county to facilitate people queueing at local shops and exercising on local roads. As councillors we had noticed locations where narrow footpaths mean people have to pass close to each other either going in opposite directions or when there’s a queue outside shops. We, and fellow Green councillors around the country, were also aware of steps being taken across the world to reallocate road space.

When we raised it with the Corporate Policy Group (CPG) last week we were pleased with the positive reaction and support from other councillors and the immediate engagement of officials who shared our concerns and perspective on the potential for improvement. Yesterday the CPG approved a plan from the Operations Department addressing different areas of the County. Measures include

If you have noticed other locations where similar measures could be taken, please suggest them.

We’re trying to get Fingal to meet online due to the pandemic and to ensure that even when restrictions are somewhat loosened, Councillors who are cocooning themselves or whose family or work situation puts them at higher risk, can attend meetings online.

We’re being met with legal issues as outlined in this opinion.

The March Area Committee received an update on the School Street in Malahide. In summary, the initiative is successful so far in improving safety and encouraging more active travel to school, and will be continued for the full planned 18 month trial period. It has also resulted in a reduction in exposure to air pollution. The Council will be implementing school streets at other schools in Fingal.

Here is the RTÉ Morning Ireland climate change debate where I represented the Green Party.

Here are some extracts from the RTÉ Drive Time constituency debate, where I address the environment and drug crime. The full debate is here

The posters are going up, the flyers are going in the doors and the canvassing has started to get me elected in Dublin Bay North for the 33rd Dail! 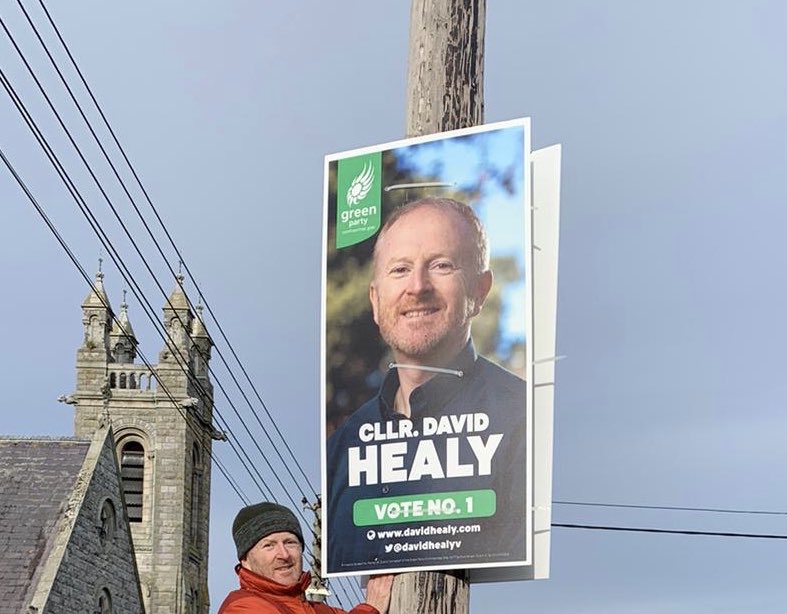 We need all the help you can give. If you can help leafletting, canvassing or putting up posters, please contact me. If you wish to give a donation, please follow this link: https://donorbox.org/david-healy-green-party-dail-election-capaign-dublin-bay-north

Thank you for your support!