Dublin City Council has published a proposal to redesign the cycle route from Clontarf to Amiens St. This is the main route to the city centre for residents of the Howth/Malahide ward. The previous time they did a redesign in this area for a quality bus corridor in 2006 they failed to design safely for cyclists. Unfortunately they have come up with another unsafe design.

My concerns are as follows:

BICYCLES AND BUSES SHOULD NOT BE MIXED.
This is the busiest arterial cycle route in Dublin, with over 1400 cyclists and over 200 buses crossing Newcomen bridge southwards in the morning peak. The proposed design means buses would continue to pull across the cycle lane to reach the bus stops. This is bad news for both cyclists and bus passengers. We believe the design should be suitable for cyclists of all ages and abilities. This means `island` bus stops.

FAIRVIEW’S STREET TREES SHOULD BE SAVED.

The proposed design involves the removal of all of the footpath trees in front of Fairview Park, over 50 mostly mature trees. There is plenty of space in Fairview for a good design without felling these valuable trees.
SPACE SHOULD BE TAKEN FROM THE ROAD NOT THE FOOTPATH.

Because of a decision to maintain multiple traffic lanes, space will be taken from footpaths for the design. This makes no sense when there is less space for cars in the City Centre and the official goal is to favour walking and cycling. The design should prioritise walking, cycling and public transport because these move the most people along the route.

JUNCTIONS MUST BE SAFE FOR WALKING AND CYCLING.

The design proposes some real improvements to junctions. However other pedestrian crossings and cycle facilities have been ruled out because the required traffic signal timings would reduce capacity for cars through the junctions. Designing for pedestrians’ and cyclists’ safety should be the first priority.

Further information on the proposal is here. If you agree with these points, please make your views known to Dublin City Council, Block 4, Floor 3, Civic Offices, Wood Quay, Dublin 8 traffic@dublincity.ie before 16:30 on 9th March 2017. 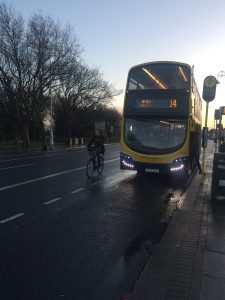 Current and future mixing of bicycles and buses 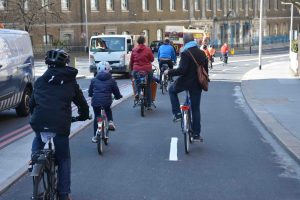 Approach to cycleways being taken in London in recent years

Fingal County Council has agreed to make a submission following a motion I raised at the Howth/Malahide Area Committee.

A proposal for a new junction at Hole in the Wall Road / Mayne Road is on public display until 9th March.

I have made the following submission:

As discussed at the Area Committee, i would like to see alternative options for junction design being considered at this location. In particular, the design set out in this video has a lot to recommend it in terms of safety. I have used junctions like this and found them much better than the design proposed.

It’s quite a simple proposal but I particularly urge anyone who cycles or walks on these roads to have a look at contribute their comments.

The Council today confirmed the following amendment I proposed to the Draft Development Plan:

“At locations where higher density development is being provided, encourage the development of car-free neighbourhoods, where non-motorised transport is allowed and motorised vehicles have access only for deliveries but must park outside the neighbourhood, creating a much better quality public realm with green infrastructure, public health, economic and community benefits.”

It reflects successful experience  in neighbourhoods such as Vauban in Germany and entire suburban towns like Houten in the Netherlands, as well of course in old cities around the world.

As recognised in the National Cycle Policy Framework (NCPF), a lot of the cycle infrastructure provided in recent years has been poorly designed.

Following on from this and the wider commitment in the NCPF to audit existing roads, I proposed the following amendment to the Development Plan.

“Review existing cycle infrastructure which was not designed in line with the Principles of Sustainable Safety in a manner consistent with the National Cycle Manual and the Design Manual for Urban Roads and Streets and undertake appropriate remedial works.”

Following public display, this amendment was confirmed by a margin of 1 vote today.

Following public display, the Council has voted, (by a margin of 1 vote!) to confirm the inclusion of the following in the Development Plan:

“Ensure that as soon as possible, but by the end of the lifetime of the Development Plan, the environment in the immediate vicinity of schools is a safe and attractive low speed (30km/h) environment, and drop-off by car within a given distance restricted.”

The text is copied from the National Cycle Policy Framework; it is something which should be happening at all schools nationwide by 2020.

The issue of squirrels has recently had some media coverage and so I thought it worthwhile to give some background.

A few key facts:
My  conclusions from this, which I will put to the SAAO Management Committee, are that the only  reasonable and justifiable actions in relation to squirrels would involve encouraging/reintroducing pine martens, if these are practical.
Much of the Howth peninsula is covered by a Special Amenity Area Order. The Management Committee, made up community, recreational and conservation representatives along with local councillors, works within the terms of the order to protect the biodiversity, landscape and amenity of the peninsula.
The questions I asked at the recent Area Committee are here and here
BBC Costing the Earth podcast Reds Return http://www.bbc.co.uk/programmes/b05pn674
NUIG Research: https://www.facebook.com/IrishSquirrelAndPineMartenProject;
http://link.springer.com/article/10.1007/s10531-014-0632-7
Vincent Wildlife Pine Marten Recovery Project (Wales, England): http://www.pine-marten-recovery-project.org.uk/
The case for pine marten reintroduction to control grey squirrels: https://www.theguardian.com/environment/2015/jan/30/how-to-eradicate-grey-squirrels-without-firing-a-shot-pine-martens
NPWS documents:
Red Squirrel Species Action Plan 2008 https://www.npws.ie/sites/default/files/publications/pdf/2008_Squirrel_SAP.pdf
Irish Squirrel Survey 2012 https://www.npws.ie/sites/default/files/publications/pdf/IWM89.pdf

A delegation from Howth / Malahide Area Committee (Cllr. Brian McDonagh, Cllr. Jimmy Guerin and myself) met the National Transport Authority (NTA) last week. We had a productive discussion on a range of issues.

This included the proposed greenway cycle routes between Holywell, Portmarnock and Balgriffin/Belmayne through Kinsealy. The Council agreed last October to my proposal to include these routes in the draft Development Plan. The decision was taken in the context of the possible location of a secondary school at the Teagasc building and the very poor quality of walking and cycling routes in the area at the moment.

The NTA started their consideration from an emphasis that secondary schools need to be provided at walkable locations but recognised the both that that the reuse of an existing building might be a significant factor in the decision, which is ultimately one for neither Fingal County Council nor the NTA, but the Department of Education. We all also noted the potential of these routes to serve other trips between towns and suburbs in South Fingal and the Northside of Dublin City.

In response to the discussion, they proposed that they would fund a feasibility study to look into the potential for routes similar to those included as indicative routes in the draft Development Plan. I am bringing a proposal for such a study to the next Area Committee meeting on 1st March, as well as recommending that the indicative routes be confirmed in the Development Plan.