In response to my observation, An Bord Pleanála has deleted the Grange Road junction redesign from the planning permission. 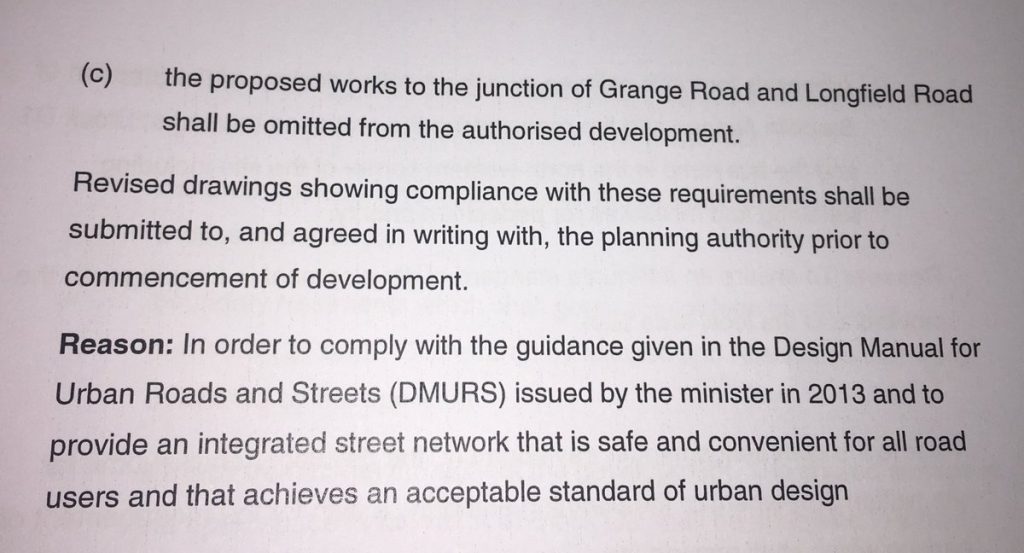 These are the relevant findings in the inspector’s report:
“The proposed development includes works to increase the capacity of the signalised junction between Grange Road and Longfield Road. They would provide an extra lane on the Longfield Road approaching that junction, removing one that heads north away from the junction. They would also provide a left turning lane on the Grange Road approaching the junction from the east and move the signals there forward, removing an existing advance stop line for right-turning cyclists. The proposed works have been justified by the applicant and the Roads Division of the council by reference to modelling of vehicular movements, but an elected member has objected to them as they fail to provide a sufficient level of service for cyclists on a route identified for such in the development plan. The proposed works to the junction would diminish the level of service for cyclists travelling east on Grange Road by removing an advanced stop line and introducing another slip lane, but only to a limited extent. However the local area plan sets out a comprehensive set of proposals regarding roads and access that do not include the works to this junction. The details submitted in the course of the application do not address the potential impact of the proposed works on pedestrians and cyclists, nor do they address the role of Grange Road as an main route serving an area much wider than that covered by the LAP, or the implications of the designation of a school site beside the junction. In these circumstances it would not be prudent to authorise the works to the junction as part of the proposed development. If works are required to this junction, their effects would need to be properly considered by the council before the design was finalised. It would therefore be appropriate that the applicant’s contribution to such works was in the form of a special contribution under section 48(c) of the planning act.”

The full report is online at: http://www.pleanala.ie/casenum/248970.htm

I have included the issue of redesigning the junction for the safety of cyclists and pedestrians on the agenda of the January area committee meeting.